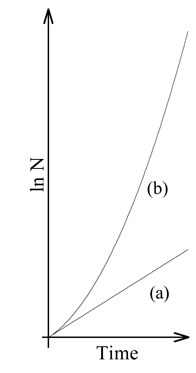 When conditions are optimal and there is no interference competition (Witting, 2000, 2002), Fisher’s fundamental theorem of natural selection (Fisher, 1930) predicts that the rate of change in average fitness

With being the per capita rate of increase, the change in population is

as illustrated by the curve in the figure.

The fundamental theorem is thus replacing the Malthusian law as the limit theorem of population dynamics; at least when the response to selection is caused by additive genetic variation. More generally, we should think of σ2 as the total potential response to natural selection, a response that includes other factors like epigenetic inheritance, social inheritance, maternal effects, and plastic phenotypic responses.

There is plenty of evidence for evolutionary processes that operate on population dynamic timescales (see reviews by Thompson, 1998; Hairston et al., 2005; Saccheri and Hanski, 2006; Schoener, 2011). This includes a natural selection acceleration of the population dynamic growth rate of aphids by up to 40% over few generations at low densities (Turcotte et al., 2011a,b). And the evolution of faster-spreading Covid-19 variants (Halley et al., 2021; Kupferschmidt, 2021) generating hyperexponential growth curves (Baruah, 2020; Pavithran and Sujith, 2022).

On selection-regulated population dynamics in birds and mammals

A general theory of evolution. By means of selection by density dependent competitive interactions.