The life history models (LHM) of Bird & Mammal Populations (BMP) illustrate how the life history variation between species are explained by selected and naturally occurring variation in other traits; referred to as axes of natural selection.

The attractors of population dynamic feed-back selection are competitive interaction fixpoints that select an invariant gradient in the access to resources across the intra-population variation in competitive quality (e.g. body mass). This selection allocates energy between quality and reproduction, adjusting the quality-quantity trade-off to select the resource gradient of the attractor. Variation in the main axes of selection changes the gradient, activating the feed-back selection that adjusts other traits to restore the resource gradient of the attractor.

Increased mortality e.g., reduces population growth, the associated level of interference competition, reducing the competitive advantage of quality, generating a smaller gradient between resources and quality. The smaller gradient selects for increased reproduction at the cost of quality, generating increase population growth, and thereby restoring the resource gradient from the associated increase in interactive competition.

Apart from the level of interference competition (ι), and the growth rate influence from adult (pad) and juvenile (lm) survival, other main axes of selection include the net energy that is generated by resource handling (α, which summarises the ecological, mechanical, physiological, & biochemical processes that organisms use to handle their resources) and mass-specific metabolism (β).

The four plots in Fig. 1 from Witting (2022a) illustrate how the medians of net energy, annual reproduction, body mass, and population abundance are explained by variation in axes of selection. Net energy (ε, top left plot) is explained by resource handling and mass-specific metabolism, as the LHM of BMP define net energy as the product between resource handling and metabolic pace. 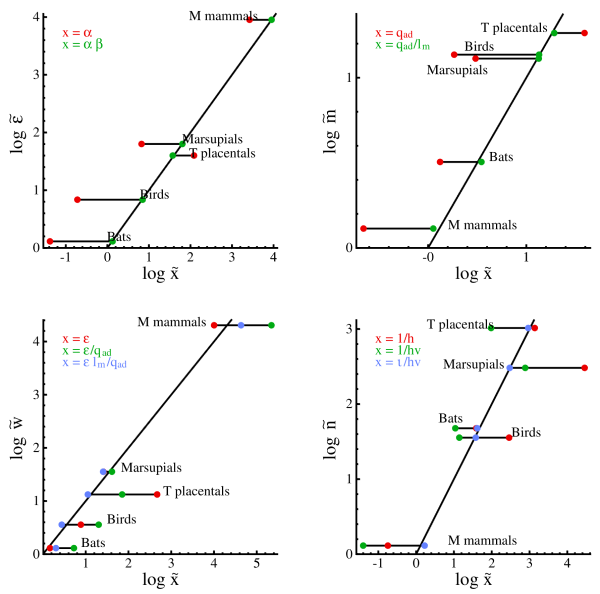 The competitive interaction fixpoints select the population abundance to a level where the selection of body mass by interactive competition outbalances the selection of the quality quantity trade-off (which selects for the absence of mass). With interference competition occurring mainly in the zones of overlapping home ranges, the natural selection of animal abundance becomes, as illustrated in the lower right plot in Fig. 1, a function of the naturally selected interference, home range, and foraging speed (as the encounter rate depends on speed).

The inter-specific distributions of abundance, home range overlap, and level of intra-specific interference competition for birds and terrestrial mammals. From Witting (2022a).

That the main attractor of life history selection is a competitive interaction fixpoint is also indicated by the distributions of life histories across birds and mammals. Comparing terrestrial mammals and birds, Witting (2022a) found the distributions to differ for basically all parameters, as illustrated for population abundance in the left plot of Fig. 2. Yet, for the home range overlap---that is essential in relation to the competitive interaction fixpoint because the interactive encounters occur mainly in the overlap of home ranges---the distributions for birds and terrestrial mammals are almost identical (Fig. 2, middle plot). This suggests a common constraint on the ecological processes that generate interactive competition.

It is equally intriguing that the medians of the distributions of the estimated level of interference (ι, left plot in Fig. 2) differ by a factor of 2.3 between birds and mammals. This difference is exactly the theoretically predicted difference between species that are selected at an evolutionary equilibrium with stable net energy and body masses (suggested for birds), and species that are selected at an evolutionary steady state with an exponential increase in net energy and body mass (suggested for terrestrial mammals).

Similar decompositions of the life history variation within and across 40 orders of birds and 29 orders of mammals are shown in Fig. 3 and 4 (from Witting, 2022b,c). With the unexplained within order variation being shown by bars, and the unexplained between order variation being shown by the medians of orders (dots), the bars shrink, and the dots converge on the overall median, as the total variation (black bars) is explained by resource handling (blue), mass-specific metabolism (yellow), adult mortality (purple), juvenile survival (green), and interactive competition (red). 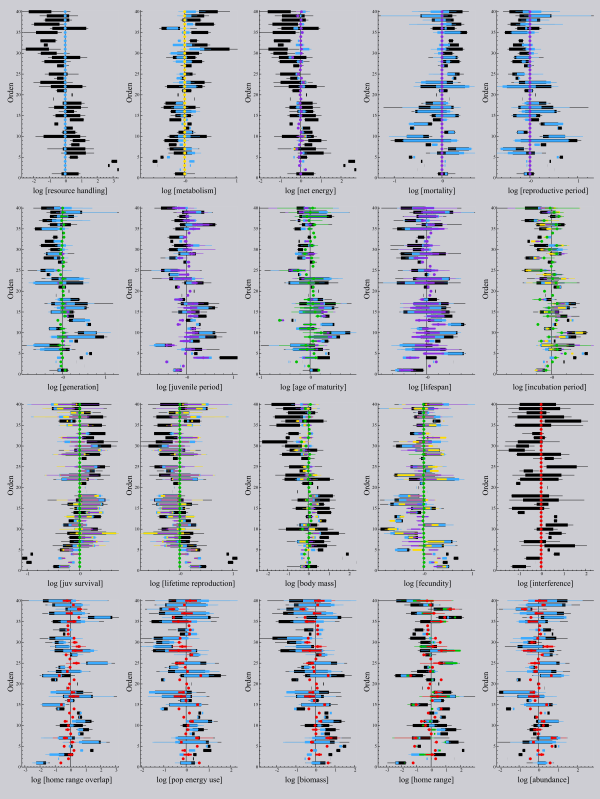 Especially in birds, but also in mammals, the level of interference is the parameter that is least affected by the variation in resource handling, mass-specific metabolism, adult mortality, and juvenile survival. This supports the existence of an invariant competitive interaction fixpoint, with the influence from the level of interference (red) being strong in ecological traits like abundance, home range, home range overlap, biomass, and overall energy used by the population. Taken together, the five axes of selection in BMP explain 82% and 64% of the within order, and 80% and 91% of the between order, variation in the body mass, demography, and population ecological traits of birds and mammals.

Click here to read how the life history models of BMP extend into population dynamic models.