Maximum animal mass over 3.5 billion years of evolution ñ at the metabolic limit

Evolution at this limit will proceed with a mass that increases from primary selection on resource handling and/or increased resource availability. The increase in mass will generate an allometric downscaling of mass specific metabolism away from the upper limit. And if the primary increase occurs relatively slow, this will allow for a selection increase that will return mass specific metabolism to the upper limit. This form of evolution follows the yellow curves in Fig. 1, and it is log-linear in physical time with a dw/dt-exponent of one in both 2D and 3D, and a rββ/rα-ratio of 1/2 in 2D, and 1/4 in 3D.

Lifespan (τ, ) and body mass (w, ) evolution in physical time given intra-specific interactions in 2D. Evolution along an upper biochemical limit on mass specific metabolism follows the yellow curve that is characterised by a dw/dt-exponent of unity (). From Witting (2020). 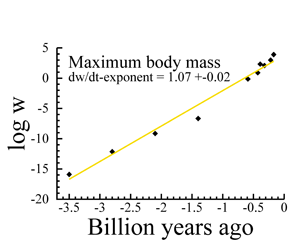 In a classical figure, Bonner (1965) showed a continued increase in the maximum length of animals over 3.5 billion years of evolution. I recalculated length to mass (Witting, 2008, 2020) and estimated the rate of change as a function of mass, and found an almost log-linear trajectory with a dw/dt-exponent of 1.07 (left figure). While the increase wasnít uniform (Payne et al., 2009), it illustrates a macro evolution that is bound by an upper limit on metabolism. This is confirmed also by a mass specific metabolism that is invariant of mass across taxonomic groups from bacteria to mammals (Makarieva et al., 2008; Kiørboe and Hirst, 2014).

The natural selection of metabolism explains curvature in allometric scaling

Inevitable evolution: back to and beyond the 20th Century paradigm of contingent evolution by historical natural selection