Given the rescaling of the life history with mass and metabolism, we can calculate the exponents of the final body mass allometries for a variety of situations. These are given as the sum of the exponents for the metabolic-rescaling and mass-rescaling allometries, with the former representing the importance of metabolism for the evolution of mass, and the latter the rescaling of the life history in response to the evolutionary changes in mass.

These exponents are listed in Table 1, where they are denoted by a hat over the trait symbol. Apart from the home range exponent that is always one, the exponents depend on the ββ• exponent for the pre-mass component of mass specific metabolism (ββ). They are shown for the two extreme cases where all the variation in net energy (ε), and thus also body mass, is caused either by variation in metabolic pace (ββ•=1) or by variation in resource handling/availability (ββ•=0). The intermediate case with similar importance of handling and pace (ββ•=1/2) is also shown, together with cases where post-mass metabolism is independent of mass (b=0). The latter depends on the spatial dimensionality of the interactive behaviour, with b=0 for ββ•=1/2d.

The majority of post-mass exponents are given as fractions, where 2d is the common denominator. The most well-known set of allometric exponents for multicellular animals, i.e., the set where b=-1/4, is evolving for two dimensional interactions when all of the variation in body mass is caused by variation in the handling and availability of resources across ecological niches. 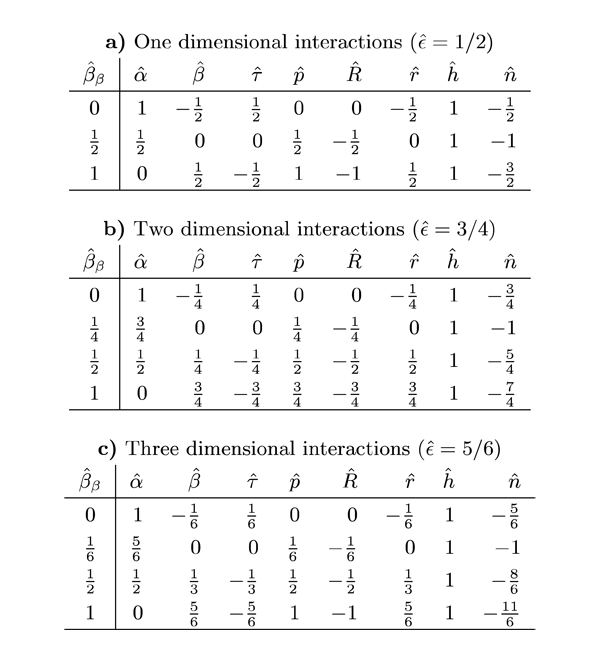 The often observed Kleiber scaling in taxa of multicellular animals (with 1/4 and 1/6 exponents) is a special case where the final allometries resemble mass-rescaling. This is because the majority of the body mass variation evolves from the handling of different resources across a variety of niches, with only minor variation in the pre-mass component of metabolism.

Allometries on other scales include metabolic-rescaling. With an apparent 5/6 exponent for mass specific metabolism (DeLong et al., 2010), prokaryotes follow the prediction for the smallest single celled self-replicators. They are predicted to have a metabolic-rescaling exponent of unity (ββ•=1) and body mass variation that follows from evolutionary differences in mass specific metabolism.

And mass specific metabolism is invariant of mass on the macro evolutionary scale from prokaryotes to mammals (Makarieva et al., 2005, 2008; Kiorboe and Hirst, 2014). This follows from evolution around an upper metabolic bound, where the metabolic decline from mass-rescaling is balanced by a metabolic increase from primary selection on the net energy of the organism.