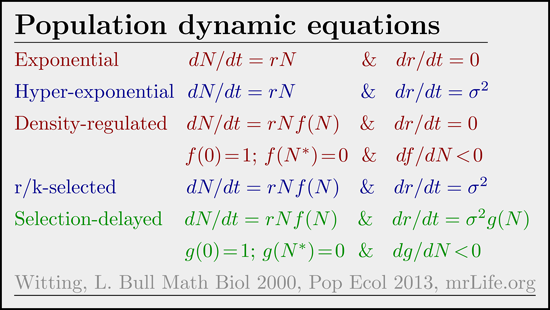 Red: Traditional equations with no selection. Blue: With r- and/or k-selection. Green: With feed-back selection by density dependent interactive competition.

Because of its ability to determine the level of interference competition in the population, it is the selection of mass that determines the abundance of the population dynamic equilibrium.

The result of this integration, of traditional density regulated growth with the feed-back selection of interactive competition, is a unification of the equations of natural selection and population dynamics.

Limitation is then a function of the selected density regulation optimum (Witting, 1995) that determines the Damuth (1981, 1987) allometry, where the abundance of terrestrial animals tends to scale with a negative 3/4 exponent of mass. And the dynamics around the equilibrium is a selection-delayed cycle (Witting, 2000, 2013), that resembles the population dynamics cycles that have fascinated ecologists for decades. And should the dynamics be taken to the limit of zero density, it transforms into a hyper-exponential curve where Fisher's (1930) fundamental theorem of natural selection is replacing the Malthusian principle of geometric growth (Witting, 2000, 2002).