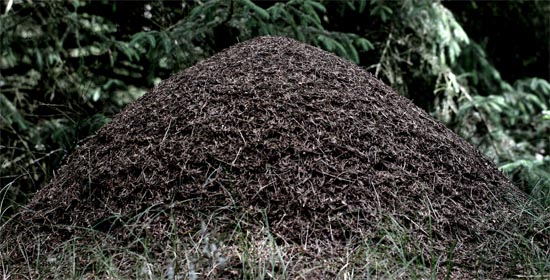 , as this colony of red wood ants, is selected as the interacting unit when the intra-specific interference competition is extreme because of an evolutionarily constrained body mass. Photo L. Witting

Because of its ability to determine the level of interference competition in the population, it is the selection on mass that determines the evolutionary fate of the organism.

This is seen across the tree of life. As described in Witting (1997, 2002, 2008), if the average net energy is negligible, it may not generate a level of interference that is high enough to select for a non-negligible body mass. The frequency-independent selection of the energetic trade-offs are then selecting for nothing but self-replicating molecules.

But if the net energy is sufficiently large, the density-frequency-dependent feed-back selection of interactive competition is fully developed, and a selection attractor for a non-negligible body mass can evolve. And if this net energy is stable, the attracting level of interference will be exactly so high that there is interactive selection for sexual reproduction between an interacting male and a reproducing female.

If the selection is unconstrained instead, with an exponential increase in net energy and mass, the level of interference that is determined by the selection attractor is somewhat higher, with interactive selection for co-operative reproduction, where the sexual pair receives help from a single, or few, offspring.

A more extreme case may evolve if there is a temporal or permanent upper limit on mass. The predicted increase in net energy is then no longer selected into an exponentially increasing mass, and this generates the evolution of extreme population densities with extremely high levels of interference competition. The latter is then selecting for the fully evolved eusocial colony with thousands or millions of sexually produced offspring workers.