The selection of mass selects allometries 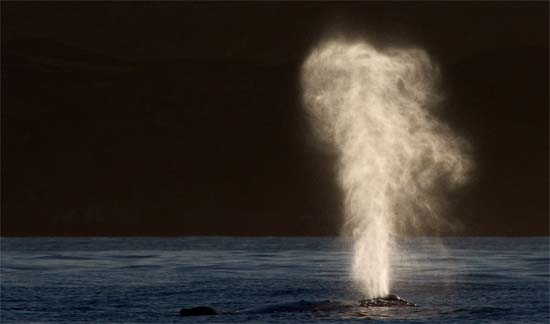 one of the largest species on Earth. According to Malthusian Relativity, it is the density dependent interactive competition between the individuals in the population that selects the energy from foraging into body mass, and it is the optimisation of interactive competition for increased foraging that selects the exponents of the body mass allometries. Photo L. Witting

The importance of allometries for evolutionary biology is hard to overestimate as they show how the life history is co-evolving with body mass across the tree of life.

But it has been frustrating to see the field lose focus. It started promising with a surface rule (Rubner, 1883), and Kleiber's (1932) suggestion that the “real” exponent for total metabolism is closer to 3/4, than 2/3. I joined the game in 1995 when there were no general explanation, and showed that the 3/4 exponent is explained by the optimisation of the interactive competition that selects for the evolution of non-negligible body masses (Witting, 1995, 1997).

A few years later, we got West, Brown and Enquist's (1997, 1999) study in and that missed the point that the natural selection of body mass is actually selecting the allometric exponents. They proposed instead that the exponent is given by the physical constraints of resource transportation networks in individuals. And with biology being forced to adapt to the laws of physics, the network idea was soon elevated to apply to all organisms at all scales (West et al., 1999).

Following this the allometric community appeared to be in euphoria with an overwhelming number of physiological models that explained the right exponents from slightly different assumptions. But other theoretical arguments showed that physiological networks can easily be adjusted to other exponents (e.g., Dodds et al., 2001; Apol et al., 2008). This illustrates the weakness of a physiological view that miss the essential point that it is the physiology (with all its networks) that adapts to the primary natural selection function of the organism (i.e., the life history), and not the natural selection of the life history that is given exclusively by intrinsic constraint (Witting, 1998).

It was also found empirically that there is no such thing as a universal 3/4 power exponent between metabolism and mass (e.g., Peters, 1983; Glazier, 2005; White et al., 2007). The exponent varies with the activity level, it differs to some degree between phylogenetic lineages, and the intra-specific exponents are often different from inter-specific exponents; but they should be the same if determined by physiological constraints.

Today there appears to be widespread disillusion, as the 3/4 rule seems to have vanished in the thin air with the variance argument against the allometric network model. But an approximation of 3/4 is still our best empirical estimate in many cases (e.g., Savage et al., 2004; White et al., 2009), and this shows that 3/4 is indeed likely to be an essential, although not unique, number that evolves by natural selection. And the interactive foraging behaviour is still selecting for biotic mass and diverse allometric exponents; with 5/6 and 1/2 replacing 3/4 in three and one dimensional ecological systems, and yet other exponents being expected when the foraging ecology deviates from the described base-case. So let us return to the study of biological regularities, as they are observed empirically and explained by a few basic principles of life history selection.